A chilly wind greeted us as we headed out for the trout opener, but our anticipation kept us warm. The lake had been stocked heavily, and there were some larger, triploid rainbow trout in the mix that we knew would give us a good tussle when hooked. As the chilly waters of the lake started to warm, so did the bite. We got a few short hits early, but when the sun hit the water the trout started to latch onto trolled F-4 Flatfish with conviction. We reeled in catchable rainbows before Buzz’s son hooked and fought in one of the triploids. It lay in the net, fat and sleek. We all wanted one.

The bite continued to improve, and by 11 that morning we were putting the finishing touches on our limits. We had changed from trolling to using the “crawl” method, and we discovered the triploids preferred this to trolled baits. In addition to the catchable there were five fat triploids in the mix.

As the water warms in the spring, trout become more active. They are ravenous from their long winter fast, but the still-cold water means they are often sluggish, and finicky. Add to the mix some high, dirty water from spring run-off or the instability of spring weather, and it becomes apparent that springtime trout are not easy. If you want success in your early outings tune your tactics to the conditions and you’ll fill your creel with trout.

Elevation plays a key role in western spring trout fishing. As the seasons open the lowland lakes will warm first, followed by the mid-elevation lakes and rivers. The ice will not clear from many high alpine trout waters until late May or early June. Another consideration is depth. During winter the trout are often holding near the bottom. As the surface water warms the trout will be drawn up into the top of the water column. On sunny spring days the trout are often near the surface, but when cold snaps move through they head back to deep water.

Spring weather often brings gusty winds, and those winds will push the warmer surface water to the windward shore, creating a warmer pocket near the bank. The difference may be only a degree or two, but that difference is enough to draw the trout. The Wind will also create a strong chop that will roil the water near the bank, dislodging insects and invertebrates from their hiding places.

Trout will key in on this bonanza and pull in to feed in schools. Casting spoons and spinners to these hungry, prowling trout can draw some vicious strikes. 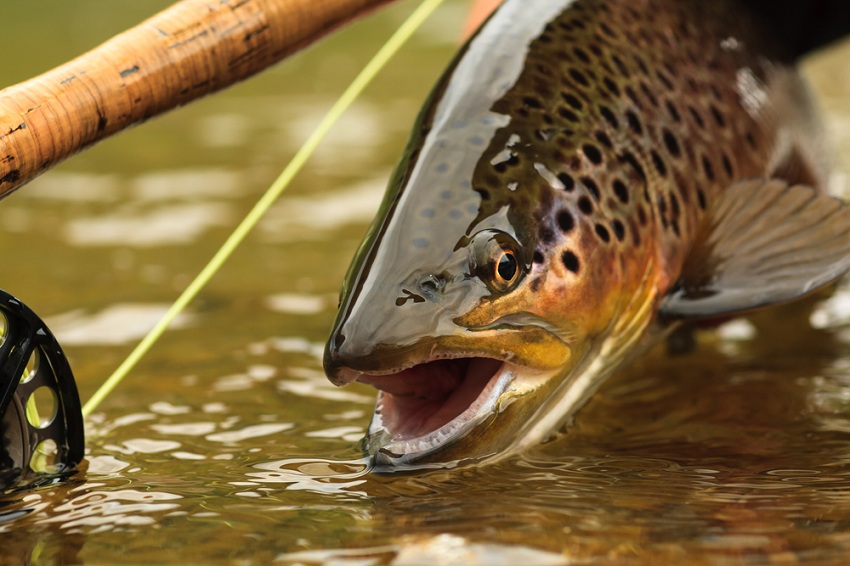 In the spring, trout are attracted to inlet streams for many reasons. First, rainbows and cutthroats are drawn to the creeks to spawn. Second, a bubbling creek pumps highly oxygenated water into the lakes it feeds. They are an excellent source of food, carrying insects and small fry down to the waiting trout.

The south facing banks of a lake or pond will catch the sun and warm up first, and that warm water draws both food and trout. Big browns and brook trout in particular will cruise these southern exposures looking for a meal, and they are susceptible to trolled or casted baits when they do. Lake trout are another species that rises from the depths to feed along sunny shorelines in the spring months. This is the best time of year to encounter, and hook, giant, trophy-class mackinaw.

Cold springtime water temps slow a trout down, and it will take it longer to move toward and grab your bait. That means you have to slow your presentation way down to give them more time. Buzz Ramsey of Yakima Bait is an avid trout fisherman that loves to fish for trout in the spring, and he fishes slow. “And I mean dead slow,” he said. “When I’m trolling I’m talking about ½ mile an hour. It’s just enough to make the rod tip wiggle.” When Ramsey is casting for trout he slows his presentation down as much as possible, too.

One of the weapons in his arsenal is the popular Worden’s Rooster Tail spinners, which spin well even with the slowest of retrieves. When the trout are slow to take his spinners he will often tip the back hook with a bit of a soft plastic bait.

When the trout are really moving slow, still-presented baits can be deadly. Fished below a bobber, simple baits like worms and salmon eggs offer the trout a morsel that isn’t moving at all. The key is to find the depth the trout are cruising at. Start shallow and keep setting the line deeper until you get bit. On days when the trout are cruising near the bottom still-fished dough baits can be very effective. About 18 to 24 inches above a small hook, crimp on enough split shot to cast the bait out. Put enough dough bait on the hook to float it.

This keeps the bait floating off the bottom where the cruising trout can see it. Sometimes tipping the dough bait with salmon eggs or worms will add a little incentive.

Slow-moving spring trout want an easy meal, one that won’t require much energy to catch, so they tend to key in on smaller easier-to-catch morsels. That means anglers should try smaller size lures than they use in the summer. Gold and silver lures are often effective for trolling, Ramsey noted. When the trout are slow to take them, he often tips a back hook with a soft plastic attractor. Spinners and spoons are no different. Use the smallest size you can in the early spring, and size up as the trout get more active.

As the name suggests, this method started in California and is now spreading through other parts of the west. It works best from a boat but can be adapted to shore fishing. Start with a few split shot about 2 feet above a hook. Use just enough weight to cast, but not so much it will drag the bait down too fast. Remember, spring trout move slowly, and if it falls too fast they won’t take it.

Thread a soft plastic trout worm on the hook. The best colors depend on the water clarity. If you are fighting turbid water, an orange or green color can be effective. In clear water black and white are good, as are purple and sometimes blue.

Cast the bait out and let it sink for 3 or 4 feet. Lift the rod tip and reel in a few cranks very slowly. Then let the worm drop a few feet and repeat the process. When you get bit, let the trout suck it in for a second or two, and you will set the hook in more trout. Strike too quickly, and you may miss it.

Before long, the cool days of spring will fade to the hot dog days of summer. The heat will dampen the trout’s willingness to bite. Get out there right now for some of the best trout fishing of the year, and use these tips to creel more fish.